Warren Buffett may not be a fan of stock splits when it comes to some stock classes of his own company, Berkshire Hathaway, but several notable names have been going down this route recently.

A split reduces the dollar value of a company's stock and leads to an increase in the number of outstanding shares -- a purely cosmetic move as it doesn't do anything to boost the intrinsic value of a company. However, companies sometimes turn to stock splits to make the shares more attractive to a larger pool of retail investors. It is believed that the increased accessibility following a split can boost the retail demand for a company's shares, and thereby lead to an increase in the stock price.

Warren Buffett's top holding, Apple (NASDAQ: AAPL), executed a stock split in August 2020. Amazon (NASDAQ: AMZN) is another Warren Buffett holding whose stock split went into effect on June 6. Investors can still buy these stock-split plays from Warren Buffett's portfolio at attractive valuations right now. Let's see why that could turn out to be a smart long-term move. 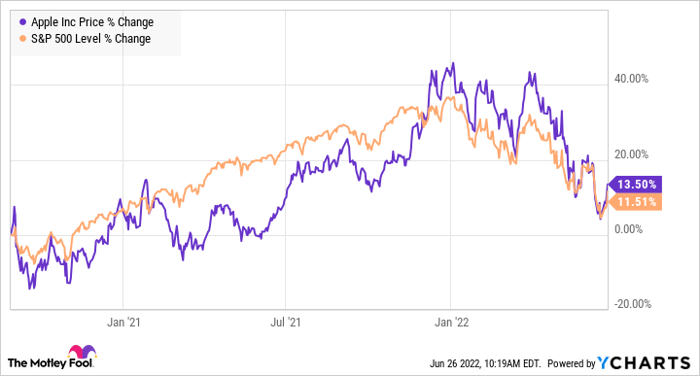 Apple's weak returns can be attributed to the broader stock market sell-off this year. However, this also means that investors who missed buying the stock after its split can still buy it at an attractive valuation following its pullback. Apple currently sports a price-to-earnings (P/E) ratio of 22.4. For comparison, it was trading at over 40 times trailing earnings at the end of 2020.

Buying Apple at this valuation looks like a no-brainer, as the company has multiple catalysts that could send the stock higher in the long run. These growth drivers include the iPhone, the services business, and Apple's potential entry into emerging technologies such as headsets and self-driving cars.

The iPhone, for instance, is dominating the fast-growing 5G smartphone market. Strategy Analytics estimates that Apple cornered a 31% share of the 5G smartphone market last year. More importantly, Apple is also enjoying robust pricing power thanks to the adoption of 5G smartphones. That's evident from the 14% increase in the average selling price (ASP) of the iPhone last year to $825. This was well ahead of the global smartphone ASP of $322. What's more, Apple managed to boost its iPhone ASP despite increasing its share in price-sensitive emerging markets such as India, Brazil, Vietnam, and Thailand.

According to a third-party estimate, the global 5G smartphone market could clock annual growth of 123% through 2027. So it wouldn't be surprising to see the iPhone drive impressive growth for Apple in the long run thanks to a mix of higher volumes and healthy pricing driven by the rapid growth of the 5G smartphone market.

Additionally, Apple's rumored entry into potentially lucrative markets such as autonomous cars could substantially boost the company's revenue and stock price. So investors who haven't bought Apple following its split still have an opportunity to do so -- it is cheap right now and is sitting on solid catalysts that could supercharge this tech stock in the long run.

Amazon stock has headed south since splitting earlier this month. It is now trading at 54 times trailing earnings, which, though expensive, is lower than its five-year average multiple of 121.

Amazon stock's decline following the split is a blessing in disguise for investors looking to buy a growth stock. After all, the company is expected to clock annual earnings growth of 40% for the next five years, which isn't surprising given the opportunities in the e-commerce and cloud computing markets.

Amazon is expected to generate $525 billion in revenue this year, which would be a 12% jump over 2021. The company's growth rate is expected to pick up the pace in 2023, with revenue expected to jump an estimated 17% to $613 billion and adjusted earnings anticipated to more than triple to $2.71 per share. Even better, Amazon is expected to sustain its growth trajectory in 2024 as well, as evident from the chart below. 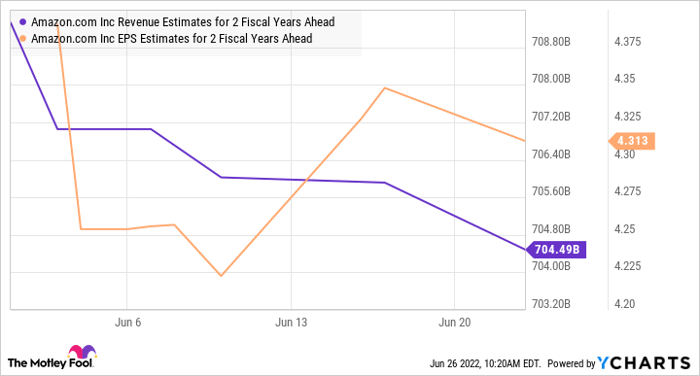 AMZN Revenue Estimates for 2 Fiscal Years Ahead data by YCharts

Amazon could sustain its impressive growth for a much longer time. E-commerce, which is Amazon's biggest business with 84% of its top line, is set for secular long-term growth. According to a third-party estimate, global e-commerce sales could more than quadruple by 2030 to $17.5 trillion, compared to $4.2 trillion in 2020.

Amazon is a key player in several e-commerce hotspots around the globe, so the company is in a nice position to capitalize on this market's expansion. Meanwhile, Amazon built a solid position for itself in the cloud computing market, pulling well ahead of competitors with a market share of 33%. This points toward yet another enticing opportunity for Amazon to clock incremental revenue growth, as the global cloud computing market is expected to more than double in revenue by 2026 compared to last year's levels according to third-party estimates.

So even though Amazon's stock may not have taken off following its split, investors shouldn't miss the bigger picture, as its two big growth drivers could lead to healthy upside in the long run.

10 stocks we like better than Apple
When our award-winning analyst team has a stock tip, it can pay to listen. After all, the newsletter they have run for over a decade, Motley Fool Stock Advisor, has tripled the market.*

They just revealed what they believe are the ten best stocks for investors to buy right now... and Apple wasn't one of them! That's right -- they think these 10 stocks are even better buys.

6 Massively Sold-Off Cryptos to Buy Before They Rebound