Meta Platforms (NASDAQ: META) faces substantial headwinds that are hurting its prospects. Consumers are once again changing the way they interact with social media apps. The change is forcing Meta Platforms to adapt, which may or may not work out in the longer run. Moreover, Apple (NASDAQ: AAPL) has made changes to its platform, making it harder for Meta Platforms to collect data on users. That reduces a lucrative source of revenue from showing targeted advertisements.

Partly because of these headwinds, Meta's stock is down 58% off its highs. Let's look at these red flags in more detail to determine what they could mean for investors.

1. From pictures to video

When Facebook started 18 years ago, people mainly communicated on the platform through text-based posts, replies, and messages. As the technology of mobile phones improved, including better cameras, posts shifted heavily in favor of photos. Most recently, the enhancement of internet speeds has again changed how people post and what people consume on social media. The short-form video has jumped in popularity. On two of Meta's social media apps, Instagram and Facebook, short-form videos make up 20% and 50%, respectively, of the time people spend on the platforms, respectively.

Changes in consumption habits are typically bad news for Meta because it does not yet have a robust suite of advertising capabilities developed. CEO Mark Zuckerberg highlighted on the conference call following its first-quarter earnings release that with each transition, the company suffered near-term headwinds while adapting its platform to accommodate the change in usage. Zuckerberg also noted that it has successfully managed this type of transition before, and expects a similar outcome this time. 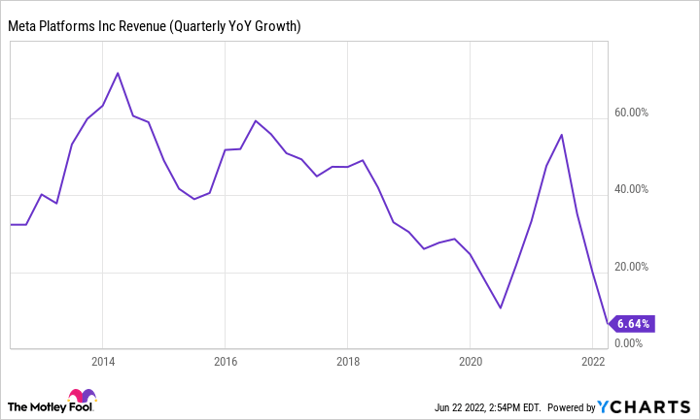 That said, Meta grew revenue by only 7% in its first quarter, which ended March 31, the slowest growth rate in several years. To put that into context, Meta grew revenue at a compound annual rate of 41.3% over the past decade. The dramatic slowdown has investors concerned.

Another meaningful red flag to Meta's future is the change in privacy policy implemented at Apple. Of course, many folks connect to one of Meta's family of apps through a device manufactured by Apple, most likely an iPhone. Zuckerberg said that "signal loss resulting from Apple's iOS changes is a meaningful headwind." Again, the CEO reassured investors that with suitable investments, the company could navigate this challenge successfully.

Nevertheless, Meta tried to quantify the impact of these changes, making it more challenging to deliver targeted ads, placing an estimated reduction in revenue of $10 billion in 2022. Meta's total revenue in 2021 was $118 billion, so the impact is expected to be meaningful, but not catastrophic. Still, if Meta cannot develop a solution to counter this change, its annual revenue could perpetually be lower by $10 billion, a red flag for Meta's future. 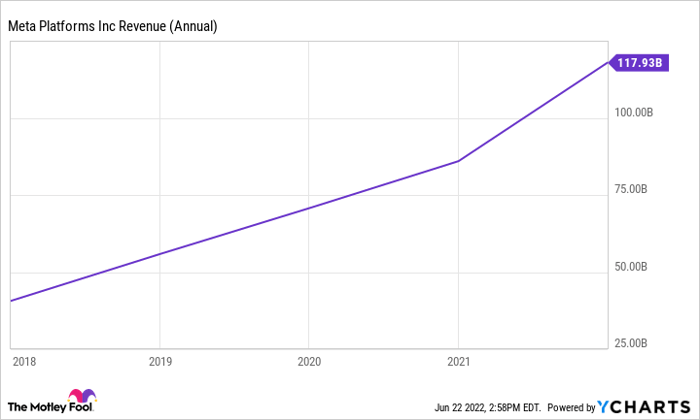 In addition to the immediate impacts these red flags have on Meta, there is the added pressure of uncertainty. Typically, when uncertainty is added to a business, so are risks. Investors are usually skeptical of management's guidance for success in new endeavors. Meta has been no different, which could explain the company's stock falling by 58% off its high.

The stock could remain depressed until Meta delivers evidence that it is effectively grappling with these changes.

10 stocks we like better than Meta Platforms, Inc.
When our award-winning analyst team has a stock tip, it can pay to listen. After all, the newsletter they have run for over a decade, Motley Fool Stock Advisor, has tripled the market.*

They just revealed what they believe are the ten best stocks for investors to buy right now... and Meta Platforms, Inc. wasn't one of them! That's right -- they think these 10 stocks are even better buys.

HEXO Remains a Sell at 20 Cents