2 Ways Skillz Can Bounce Back After the Crash
Advertisement

Skillz (NYSE: SKLZ) is a unique gaming company because it allows competitors to wager real money on the outcome of the games played on the platform. The company did well during the pandemic when demand for in-home entertainment surged. That tailwind has dissipated, making it harder for Skillz to grow users or revenue.

The stock is down a whopping 97% off its highs in 2021. However, it still has a chance to turn things around if it can better balance investments in sales and marketing with user and revenue growth. Also, if it can help onboard a few excellent game developers who create experiences that draw a broad customer base, that would do wonders.

Let's take a closer look at some of these potential strategies.

In its most recent quarter, which ended on March 31, Skillz spent $117.3 million on sales and marketing. That was up from the $96.3 million it spent in the category during the comparable quarter last year. Meanwhile, revenue in each period was $93.4 million and $83.7 million, respectively, meaning it invested over 100% of its revenue in sales and marketing, which did not result in substantial revenue growth. 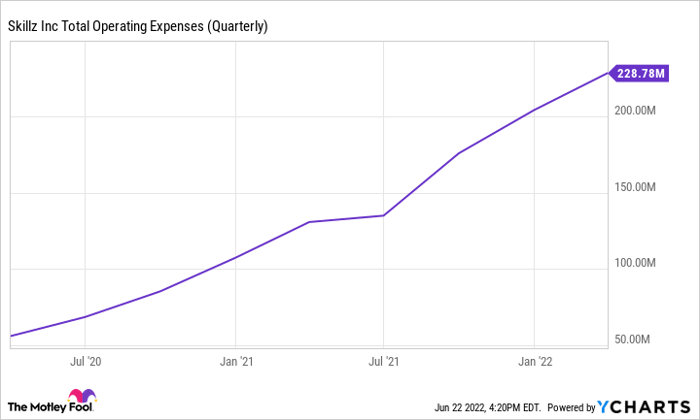 That said, in each case, Skillz does not appear to be getting good value from its marketing investments. If management were to divert spending from this category to other areas for growth, investors might feel better about its prospects, given the meager investment return from sales and marketing. 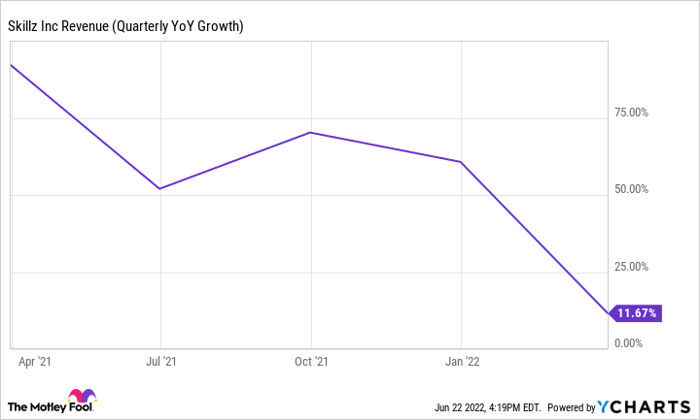 One area Skillz could invest more into is game development. Popular games could attract new users while increasing engagement from existing players. Notably, Skillz does not create the games available on its platform. Instead, it encourages third-party developers to make the content by offering them a percentage of their game's revenue.

This places a great deal of risk on developers who spend their own time and resources with an uncertain prospect of rewards. As of yet, game development has not been robust on the Skillz platform. However, Skillz recently partnered with the NFL and the UFC to spur the development of games with brand recognition. It's too early to tell if these investments will pan out, but success in creating popular games could certainly be one way Skillz stock can bounce back.

Something needs to change

With its stock down 97% off its highs, it's clear investors want to see a change at Skillz. The two moves mentioned above could do the job, but management could also think of something else.

Fortunately, the underlying idea of the business has excellent potential. When money is on the line between players, the gameplay is likely more interesting, engaging, and fun. However, investors will want to stay away until management proves more effective at managing growth investments.

10 stocks we like better than Skillz Inc.
When our award-winning analyst team has a stock tip, it can pay to listen. After all, the newsletter they have run for over a decade, Motley Fool Stock Advisor, has tripled the market.*

They just revealed what they believe are the ten best stocks for investors to buy right now... and Skillz Inc. wasn't one of them! That's right -- they think these 10 stocks are even better buys.