3 Reasons to Proceed With Caution When Considering Coinbase Stock
Advertisement

Shares of Coinbase Global (NASDAQ: COIN) are down more than 85% from their 52-week high and more than 80% year to date. But it looks like there is no rest for the weary as new challenges continue to emerge on the horizon for the crypto giant. Here are three looming threats that investors should take into account when considering a position in Coinbase.

As if plummeting crypto prices weren't enough to contend with, Coinbase is also grappling with intensifying competition and the threat of fee compression. Binance.US, the U.S. affiliate of the world's largest crypto exchange, Binance, has been ramping up in the U.S., rapidly increasing head count at a time when Coinbase has reduced it and raising money from external investors for the first time in a funding round that values the company at $4.5 billion. Binance.US plans to use this influx of capital to invest in improving its platform and to increase spending on marketing in the U.S., which could help it to take market share from Coinbase. Binance.US Chief Executive Officer Brian Shroder says that the company is on track for an initial public offering in the U.S. in the next several years, which would give it even more funding and visibility. Binance, which is privately held, says it has raised a large "war chest" and that it is targeting 50 to 100 deals to take over smaller platforms amid the current crypto bear market. 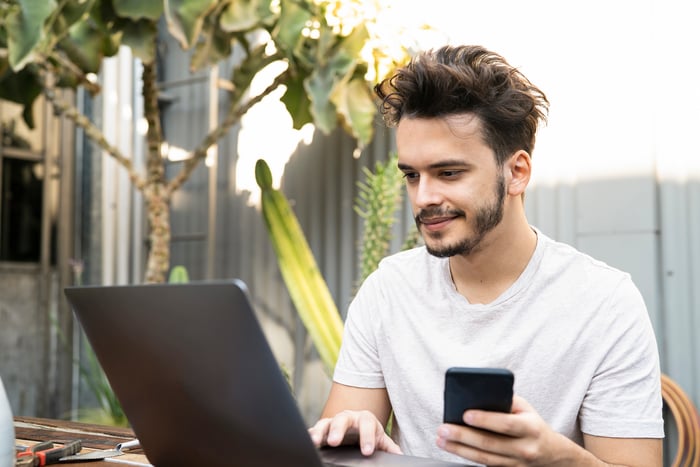 Meanwhile, FTX is making a push to gain traction in the U.S. As anyone who watched the Super Bowl or a Major League Baseball game this season can attest, FTX is marketing heavily to attract users in the U.S. FTX is led by the deep-pocketed Sam Bankman-Fried, a crypto billionaire who has been working to intervene and help stabilize platforms that are struggling with solvency during the current crypto bear market in order to stop the contagion from spreading to the crypto industry as a whole. FTX's U.S. arm added stock trading to its platform in May, allowing users to monitor and manage their stock and crypto holdings in one place, which could be a compelling option for investors. Earlier this year, FTX, which is based in the Bahamas, was valued at $32 billion in a funding round. FTX U.S. was valued at $8 billion. Bankman-Fried also recently took a stake in Robinhood (NASDAQ: HOOD) that makes him the company's third-largest shareholder, leading to speculation of a takeover. Bankman-Fried has denied that this is his motivation but says the companies could partner in other ways. In any case, one thing is clear -- Coinbase is going to have to deal with intensified competition from two large, deep-pocketed competitors who have been successful thus far outside of the U.S.

In addition to the rise of these challengers, Coinbase will also have to deal with the fact that Binance.US may be starting a race to the bottom by eliminating trading fees on Bitcoin. The maneuver is similar to when traditional brokerages began to eliminate commissions several years ago to compete with Robinhood. Coinbase has historically derived the vast majority of its revenue from trading fees, so this is a major challenge for the company.

Many observers were enthusiastic about Coinbase adding NFTs (non-fungible tokens) to its platform this spring. Unfortunately, the platform is yet to gain traction. According to data from Dune Analytics, volume on Coinbase NFT has been a paltry $2.8 million since April 20. For comparison, OpenSea, the largest NFT platform (valued at more than $13 billion in a funding round earlier this year), saw volume of over $5.7 billion during the same time frame. OpenSea had 680,560 transacting users since April 20 versus just 7,944 for Coinbase. While Coinbase can be given some benefit of the doubt as Coinbase NFT is a new platform, it poured considerable resources into this effort and surely expected to gain more traction than this over the past two months.

Let's momentarily kick the can down the road on the elimination of trading fees. A more immediate challenge pertaining to earning fees for trading is the fact that the bear market cryptocurrencies are enduring is not great for trading volume. Interest from many retail investors and other casual crypto participants has cooled for the time being as prices have plummeted, meaning trading volumes could be lower for a prolonged period of time, which would curtail Coinbase revenue. Analysts worry that this will be a major headwind for Coinbase's revenue -- Goldman Sachs just downgraded Coinbase to a "sell" rating, based on its expectation that revenue will fall over 60% this year as compared to 2021, with declines worsening in the second half of the year.

Coinbase could well have a bright future ahead and can certainly work through these challenges over the long term, but for the time being, these are some serious challenges facing the company that investors considering buying shares need to take into consideration before buying in. Things could get more difficult from here before they get better.

10 stocks we like better than Coinbase Global, Inc.
When our award-winning analyst team has a stock tip, it can pay to listen. After all, the newsletter they have run for over a decade, Motley Fool Stock Advisor, has tripled the market.*

They just revealed what they believe are the ten best stocks for investors to buy right now... and Coinbase Global, Inc. wasn't one of them! That's right -- they think these 10 stocks are even better buys.

This Is the Last Thing Coinbase Needed

Worried About a Recession? Owning These Stocks Could Ease Your Fears