3 Stocks to Buy and Hold for 2 Years
Advertisement

SHIB: Will it Keep Rising? Peter Brandt and David Gokhshtein Weigh In

Investors who are looking for stocks to buy and hold for two years should seek to purchase the shares of profitable companies. Such investors should also try to find names that are poised to exploit very strong trends over the next 24 months.

Meanwhile, I continue to believe that many other commentators are significantly overstating the risk of a recession. As I explained in a previous column, consumers’ high savings level and the strong job market should keep consumer spending elevated, preventing a recession.

Finally, there has been a great deal of commentary about the ways in which the current economic environment resembles the 1970s. But there are also many similarities with 1994, when the Federal Reserve carried out rapid rate hikes.

As in 1994, we are currently around two years removed from an economic downturn,  we’re in the midst of major technological improvements, and we have a major, positive macro economic catalyst. Ironically, the major macro catalyst then was globalization, while now it’s the construction of many factories in the U.S.

So over the next two years, I think there’s an excellent chance that we will have a “soft landing” as in 1994.

Three stocks that investors with a two-year horizon should buy to benefit from the current environment are:

Amid extremely strong demand for lithium, the company raised its full-year top-line and earnings guidance twice in May. After the second increase, the lithium miner expects its 2022 earnings per share, excluding certain items, to come in at $12.30-$15.00, versus its previous estimate of $9.25-$12.25. And Albermarle now expects to generate sales of $5.8B-$6.2B, well above its prior guidance of $5.2 billion  to $5.6 billion.

“We now expect full-year 2022 adjusted EBITDA to be up more than 160% from prior year based on favorable market dynamics for our Lithium and Bromine businesses,” the company said.

Goldman Sachs recently warned that lithium, prices could slump in the next year or two amid a glut of the metal. But Benchmark, another firm, noted that miners often don’t hit their production targets,. while the lithium used in batteries isn’t easy to make.

I would add that, in addition to EVs, lithium-ion batteries are becoming much more widely used as a means of storing electricity for homes and businesses. And the EV revolution is going to greatly accelerate in the next two years.  In light of all of these points, I don’t expect lithium prices to drop much if at all by the end of 2024.

JPMorgan (JPM) has a tiny trailing price-earnings ratio of just 8.5, that’s 10% below banks’ median P/E ratio of 9.5. And the latter metric is probably quite depressed due to pervasive worries about a recession.

What’s more, JPMorgan, like all banks, should benefit meaningfully from rising interest rates, and its credit card charge off rate averaged just 1.2% between March and May.

On May 23, the bank increased its 2022 “net interest income {guidance to} exceeding $56B, up from its previous guidance of $53” billion+. And, encouragingly for both JPM stocks and stocks in general, the bank added that “”The U.S. economy remains fundamentally strong, despite recent mixed data.”

The guidance increase prompted Societe Generale to raise its rating on JPM stock to “buy.” The firm wrote that “There is still uncertainty on {share} buybacks this year, in our view, which will likely be under pressure near term, although we think JPM will be able to earn its way back to stronger capital ratios and shareholder returns in the medium term.”

As a medium-term winner, JPMorgan is a very good  name to hold for two years. 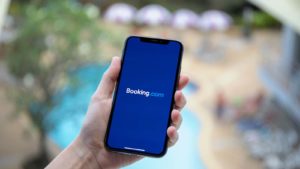 With many consumers spending a great deal on travel this year, Booking Holdings, one of the world’s largest online travel agencies, should be a very big beneficiary 0f that trend.

And, as Seeking Alpha columnist Luca Socci pointed out, unlike many other companies in the travel space, Booking’s margins won’t be directly squeezed by high fuel prices .

In Q1, the company reported  gross billings of $27 billion, which set an all-time quarterly record for the firm. “Despite an uncertain macroeconomic environment, we have seen continued strengthening of global travel trends so far in the second quarter of 2022, and we are preparing for a busy summer travel season ahead,” said Booking CEO Glenn Fogel.

Booking’s forward P/E ratio is 19, well above the sector’s median of 11. But given Booking’s strong position in the sector and the sector’s powerful rebound, I view the stock’s valuation as attractive. Moreover, I think the travel sector’s rebound will last longer than many think and could remain intact for the next two years.

After not traveling much at all for the next two years, I think many consumers will want to make up for it  over the next 24 months.  What’s more, those who can’t travel much for some reason this summer or in the upcoming holiday season will likely do so next summer or during the next holiday season.

On the date of publication, Larry Ramer did not have (either directly or indirectly) any positions in the securities mentioned in this article. The opinions expressed in this article are those of the writer, subject to the InvestorPlace.com Publishing Guidelines.

The post 3 Stocks to Buy and Hold for 2 Years appeared first on InvestorPlace.

3 Stocks Warren Buffett is Probably Buying During the Bear Market

2 Growth Stocks to Buy on the Dip