A relief rally by most cryptocurrencies on Wednesday was welcome after a dull week. As to whether the gains will be sustainable, time will tell. However, Litecoin (LTC/USD) gains were more promising, setting the token among those that could end the year in the green.

Litecoin saw increased social interest on Wednesday, with the cryptocurrency gaining by 27%. In the last one week, LTC has added 35%, setting it on course to higher prices. The latest performance happens amid positive expectations around LTC’s supply dynamics.

The mining reward halving or simply halving event occurs every four years on the Litecoin blockchain. During the event, a programmed code reduces rewards or payouts to miners by half. In the next event, the rewards will be cut from 12.5 LTC per block to 6.25 LTC. This has the effect of reducing the inflation of LTC.

If history is to repeat itself, then the LTC price will behave as it did in the 2015 and 2019 halving events. Those are the times the cryptocurrency broke from a prolonged downtrend to recover sharply, months ahead of the event.

While the pre-halving rally could be a bit speculative, Santiment data reinforce increased buying of LTC. Whales have scooped over $42.4 million worth of LTC in the last two weeks. That comes after earlier in the month, MoneyGram launched a service letting trade and hold crypto assets. The allowable digital assets were Litecoin, Bitcoin, and Ethereum.

LTC hits the May highs in a bullish push 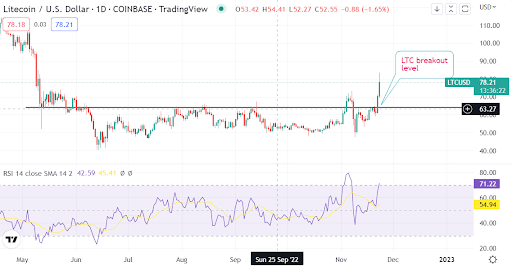 On the daily chart, LTC is on a clear bullish momentum after pushing above the $64 resistance. The resistance has been crucial, stopping bulls from taking LTC higher since May. An RSI of 71 implies that LTC could be slightly overbought.

Should you buy LTC?

A break above $64 welcomes a bullish short- and medium-term run. However, with the overbought conditions, investors would be better off buying on a retracement towards $64. The next potential LTC price target lies at $95.

Where to buy LTC

eToro offers a wide range of cryptos, such as Bitcoin, XRP and others, alongside crypto/fiat and crypto/crypto pairs. eToro users can connect with, learn from, and copy or get copied by other users.

The post Litecoin shoots high after a breakout. Why you should buy LTC in a bear market appeared first on CoinJournal.

Football and crypto – Argentina’s fan token halves in value. Should you buy it now?

4 bearish factors for Bitcoin this week

The Federal Reserve meeting scheduled on Wednesday may be hawkish for the dollar Bitcoin might give up some of its 2023 gains on a hawkish Fed All eyes are on the Fed’s view on inflation, growth, future interest rates, and quantitative tightening The Federal Reserve’s monetary policy decision is scheduled this week. It is the […]

The Federal Reserve’s monetary policy decision is scheduled this week. It is the first time the FOMC (Federal Open Market Committee) meets in 2023, and the stakes are high for the US dollar.

Bitcoin has strengthened against the US dollar in January so far, in sync with other fiat currencies. Therefore, whatever the Fed decides on Wednesday will affect Bitcoin price too.

A hawkish Fed may turn up being bearish for Bitcoin. These are the four areas where the Fed may express its hawkishness: inflation outlook, growth outlook, interest rates level, and quantitative tightening.

The Fed is committed to bringing inflation to its 2% target. This is why it has raised rates so aggressively, so if the Fed says that inflation is embedded and upside risks remain, then the US dollar should move higher.

In this scenario, the market will bet that the Fed sees ongoing rate hikes as appropriate.

The currency stance is that a sustained period of below-trend growth is likely. If the Fed changed its view and sees recession required to have a material impact on the inflation outlook, that would also trigger a sharp move higher in the dollar.

Ultimately, it is all about the interest rate level. The funds rate range has reached 4.25%-4.50%, and all eyes are on what the Fed does and says on Wednesday.

The base case scenario is that the Fed will hike by 25bp and says that ongoing interest rate increases are appropriate. Therefore, anything more than that should be bullish for the dollar and bearish for Bitcoin.

For example, the Fed might hike 50bp. This is a risk going into the meeting, especially considering that inflation is not backing down as fast as initially thought.