Someone wake up Green Day, because September is about to end.

So, what happened this month in crypto? And how do we look as we turn the page to October?

Nothing too major, but Bitcoin and Ethereum trended down over the month. Interestingly, Bitcoin drew down more than Ethereum, which is unusual compared to the pattern we have seen historically, where Ethereum is generally the more volatile of the two.

The Merge was the big news, of course, as Ethereum completed the biggest blockchain upgrade in history on September 15th. The event came and went without a hitch, although pricing didn’t do much – suggesting it was priced in ahead of time, as many suspected.

In the short-term, there is not much the Merge has affected regarding price, but it will be fascinating to track going forwards now that the pipeline underworking the Ethereum ecosystem has been completely transformed.

I’ve written before about my thoughts that the staking yield could even act as a “risk-free” proxy for the world of De-Fi, helping provide a framework for valuations and laying the groundwork for ETH to mature even more.

The groundwork should also allow Ethereum to decouple from Bitcoin. I have long viewed Bitcoin as money and Ethereum as tech, and I think this move further accentuates the dichotomy – money needs proof of work, but the base of a DeFi system does not.

But these are long-term considerations and in the medium-term, we are still very much correlated.

Let’s jump on-chain to see any notable indicators that jumped out to me over the month.

Firstly, given Ethereum completed the aforementioned Merge, there is obviously no more need for miners on the network. This is the exact opposite of ground-breaking news, but it is still cool to see the hash rate drop to zero in the below chart. 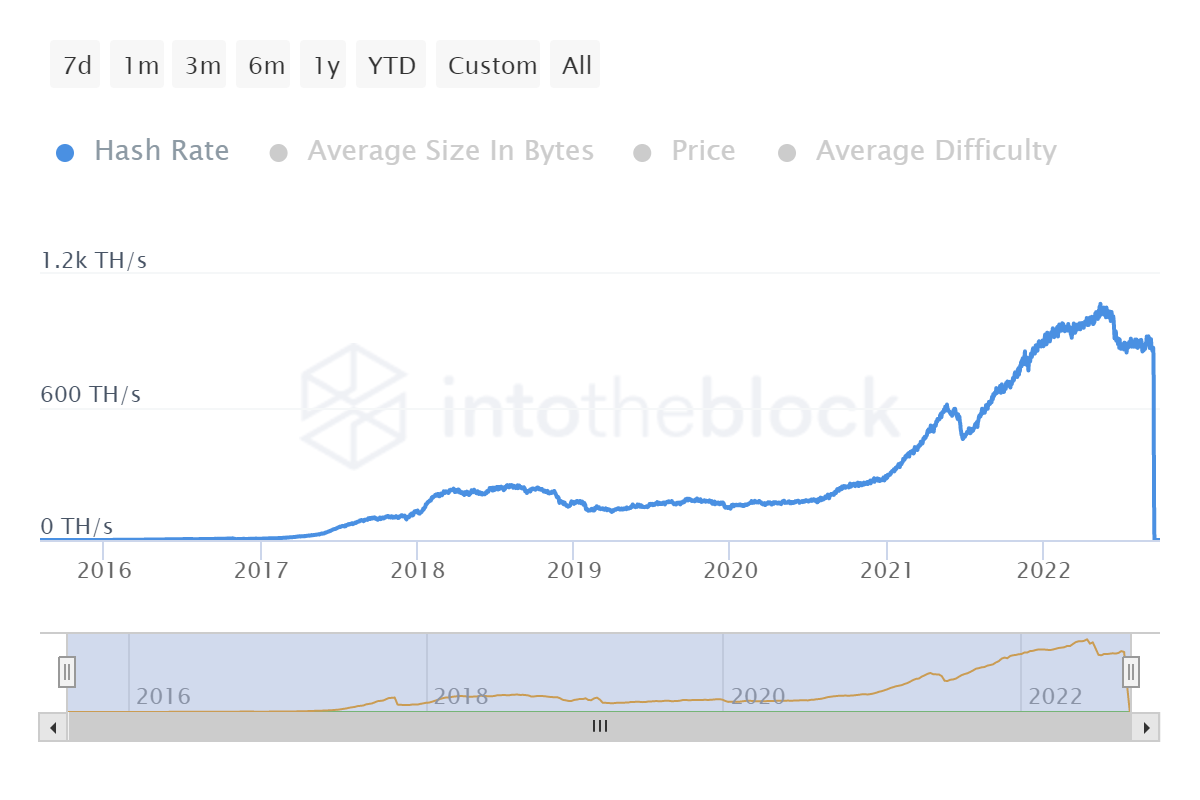 IntoTheBlock shows a neat graph below of the net issuance of ETH dropping after the Merge. It has not fallen to deflationary, which was a narrative many had pushed in the leadup to the Merge.

As I said in previous analyses, I believe this was more a case of naively following a “deflationary means price go up and I want price to go up so I will say ETH will be deflationary” kind of logic. But again, Merge went perfectly and it’s cool seeing the issuance rate drop so drastically. 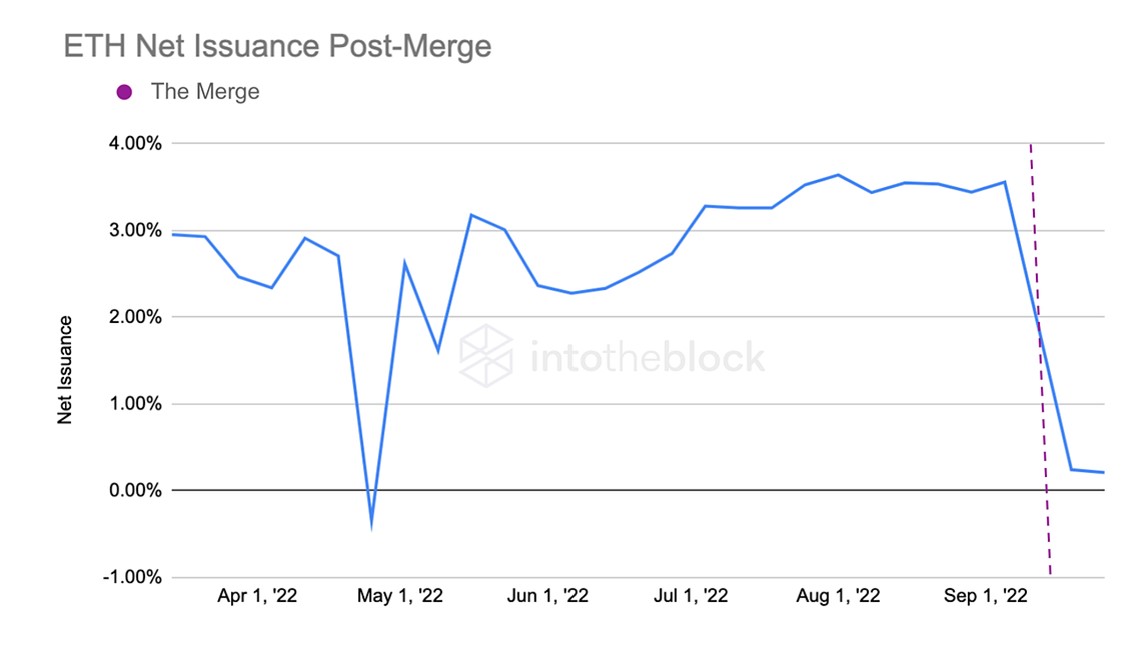 However, perhaps more sombrely is Ethereum fees dropping 80% quarter over quarter. This is for no other reason than a good old-fashioned fall in demand. The macro situation remains absolutely abhorrent and it follows that demand for the network is down (I’m likely being a little harsh as Layer 2’s are partially exacerbating this fall in fees but it is largely due to an overall fall in demand).

Flicking over to Bitcoin, the percentage of long-term holders – aka diamond handers – continues to creep back up towards its all-time high of close to 64%, set this time last year. The data shows that this demographic – defines as those holding Bitcoin for longer than a year – remain unmoved, and this latest bearish month is no different. 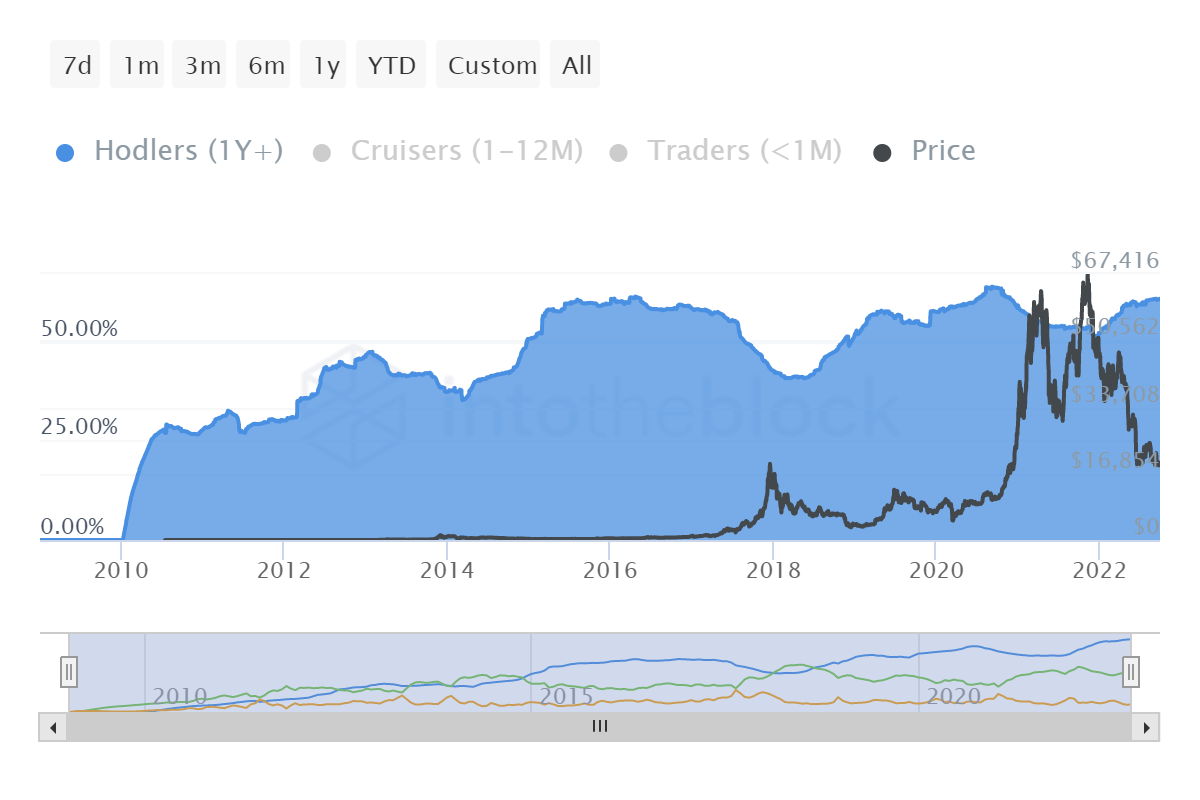 I was curious as to whether there would be an increase in the hash rate on Bitcoin following the Ethereum merge.

Looking at the graph below, showing the last three months, there does not appear to be much movement. This makes sense, I suppose – there are other coins which miners are able to flick over to easier with their equipment rather than Bitcoin. 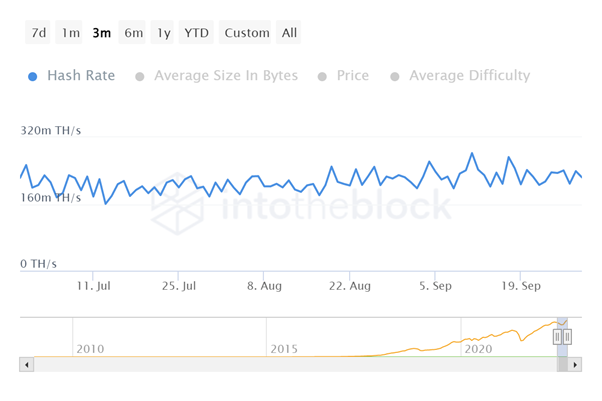 Top of that list is good old Ethereum Classic – a coin which I had largely forgotten about until I noticed its hash rate had ballooned to an all-time high on the date of the Merge, nearly 4Xing overnight.

In truth, this month was about the Merge and nothing more. We can talk about on-chain indicators all we like, and as a blockchain junkie myself, I am more than happy to do so.

But the reality is that in the short term, the only thing that matters for crypto is the macro situation. The lack of activity on price around the Merge proves this.

Crypto has been, and will continue to, trade like leveraged bets on the S&P 500 going forward. So strap in and tune in to the words of Jerome Powell, because that is all that really matters until we get some macro momentum again and things can start to move.

The post September roundup: Merge comes and goes, markets lag and macro does its thing appeared first on CoinJournal.

Bitgert price prediction: Is BRISE a Viable Buy in October?

Top 5 Cryptocurrencies Of The Week – Week 4

This article is all about the top 5 cryptocurrencies of the week that performed well in the last seven days. Let’s take a look at it in more detail.

Crypto investors are getting ready to enter the new month as the crypto market continues to advance. The cryptocurrency market will be buzzing in the next few months. There are still numerous altcoins worth considering for investment. This article is all about the top 5 cryptocurrencies of the week that performed well in the last seven days. Let’s take a look at it in more detail.

Convex Finance (CVX) is a powerful DeFi platform built on the Curve Finance exchange. It offers incentives to CRV investors in the form of higher DeFi yields. Recently, the CVX token has seen significant growth, with a price increase of +16.29% over the past 7 days, earning it a spot among the top-performing cryptocurrencies.

Avalanche is an advanced blockchain network that excels in its ability to process smart contracts and boasts exceptional scalability. As a multi-chain system, it prioritizes scalability, interoperability, and cost-efficiency. The primary use case for Avalanche is in the field of decentralized finance (DeFi). Recently, the AVAX token has seen significant growth, with a price increase of +20.29% over the past 7 days, earning it a spot among the top-performing cryptocurrencies.

Axie Infinity is a blockchain-based game that allows players to breed, raise, and battle fantasy creatures called Axies. Players can also earn cryptocurrency by participating in the game’s economy and participating in in-game activities. The game runs on the Ethereum blockchain, and the cryptocurrency used in the game is called SLP (Small Love Potion). Recently, the AXS token has seen significant growth, with a price increase of +24.97% over the past 7 days, earning it a spot among the top-performing cryptocurrencies.

Aptos is a smart contract platform that is considered by many as the successor of Diem, the failed stablecoin network by Meta. It is a Layer 1 blockchain that utilizes Move, a new smart contract programming language. The project is being developed by Aptos Labs, a blockchain company founded by two former Meta employees. It utilizes Proof-of-stake as its consensus mechanism. Move aims to enable parallel processing of transactions, potentially leading to transaction speeds of up to 100,000 transactions per second. Recently, the APT token has seen significant growth, with a price increase of +31.24% over the past 7 days, earning it a spot among the top-performing cryptocurrencies.

Fantom (FTM) is a blockchain platform that aims to provide fast and low-cost transactions. It uses a unique consensus algorithm called “Lachesis” which is based on the “Byzantine Fault Tolerance” (BFT) consensus mechanism. This algorithm allows for fast and efficient transactions, making it suitable for decentralized applications and use cases that require high throughput, such as DeFi and gaming. Fantom also has a two-layer architecture, which allows for scalability and interoperability with other blockchains. Recently, the FTM token has seen significant growth, with a price increase of +35.32% over the past 7 days, earning it a spot among the top-performing cryptocurrencies.